A Good Marriage Has Many Benefits 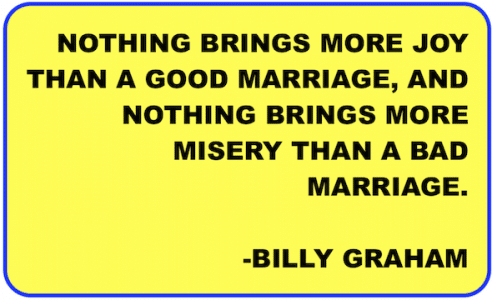 Marriage contributes to health, happiness, and overall well-being for men and women. Most social scientists agree that married people live longer, and enjoy better physical and mental health. They have lower rates of suicide, fatal accidents, acute and chronic illnesses, alcoholism and depression than unmarried people. They are more likely to save and invest money, and they have better sex lives. They earn more, advance faster in occupations, are more generous, more involved in community organizations, and are more religious.

The enduring question is whether these benefits are produced by marriage, or whether healthier and happier people are the ones most likely to marry anyway. Both are probably true. There is now convincing evidence that getting married changes people. But there is also evidence that happier, healthier, and more productive individuals are more likely to marry, and stay married, in the first place.

Marriage has these effects because there are consequences of a shared life. Married people have someone to remind them about appointments with doctors, to help in times of illness and need, and to carry some of the weight of daily obligations of family life.

Married people are better able to endure difficult times because they typically have a higher commitment to one another than is found in other relationships. This means that their here-and-now problems are understood as something that will probably pass, or can be justified by a shared past or imagined future.

Marriage is a social institution. There are standards for what married people should and should not do. This cannot be said about any other form of intimate relationship. The “shoulds” include waiting until one is mature before marrying, having and caring for children, being economically independent of parents and others, providing for one’s partner (economically, emotionally), being sexually and emotionally faithful, and caring for family members in times of trouble. The “should nots” include abuse and violence, abandonment, adultery, and sharing intimate ‘family secrets’ with strangers. In short, the norms of marriage are like the vows traditionally spoken in wedding ceremonies.

But these vows are more than personal promises. Other people, including parents, friends, and relatives share these beliefs and will react when people violate them. Married people are treated differently than unmarried people. Insurers and employers value the stability and maturity associated with the status. Married people are subject to different laws. They are held to different standards. It would be difficult to imagine that such expectations have no consequence.

Non-family living has important social consequences. Historically, very few people lived outside of families. Indeed, the practice was either prohibited by law, or heavily taxed for most of our history because non-family living has always been perceived as a threat to social order . When people are not members of a family, social control and the provision of care are more difficult. There is no public arrangement capable of monitoring and controlling behavior as effectively as other family members. Nor is there any better method of providing for dependent adults and children.

Marriage has always been the method that societies relied on to allocate responsibilities for children and dependent elderly adults. It has also been the primary method of controlling behavior and limiting deviance. Accordingly, a compassionate government has a legitimate interest in encouraging healthy and stable marriages.

The disruption of intergenerational ties between men and their children has implications for public policy. Historically, children (especially daughters) have provided most of the care needed by older parents in declining health. This informal system of kinship care is now being strained and may break. Divorce disrupts kinship ties and leaves many older people, especially men, without relatives to care for them. How will we, as a society provide the care needed by the huge number of Baby Boomers who have divorced? How can we afford to provide the care that children and kin have traditionally given?